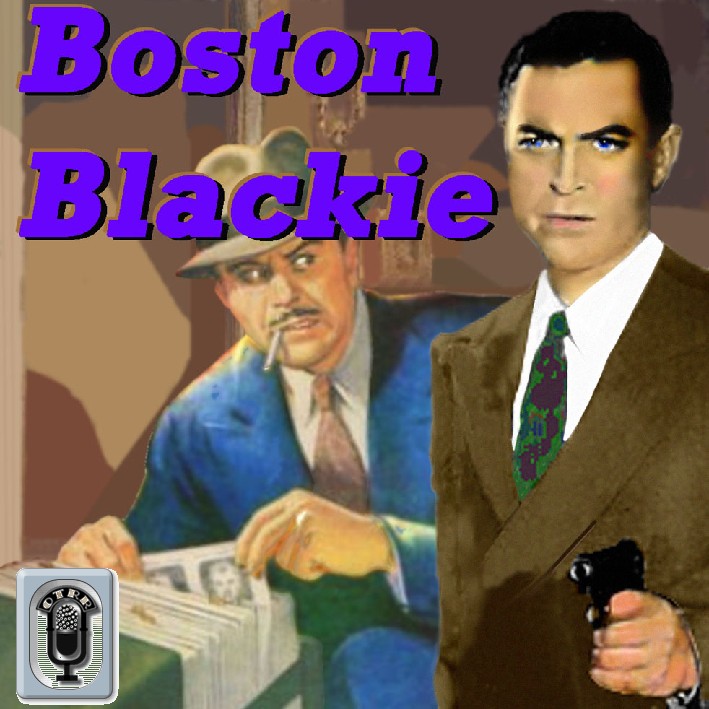 Boston Blackie is a fictional character who has been on both sides of the law. As originally created by author Jack Boyle, he was a safecracker -- a hardened criminal who had served time in a California prison. Prowling the underworld as a detective in adaptations for films, radio, and television, the detective Boston Blackie was "an enemy to those who make him an enemy, friend to those who have no friend".

The Boston Blackie radio series, starring Chester Morris, began June 23, 1944, on NBC as a summer replacement for The Amos 'n' Andy Show. Sponsored by Rinso, the series continued until September 15 of that year. Unlike the concurrent films, Blackie had a steady romantic interest in the radio show -- Lesley Woods appeared as Blackie's girlfriend Mary Wesley. Harlow Wilcox was the show's announcer.

On April 11, 1945, Richard Kollmar took over the title role in a radio series syndicated by Frederic W. Ziv to Mutual and other network outlets. Over 200 episodes of this series were produced between 1944 and October 25, 1950. Other sponsors included Lifebuoy Soap, Champagne Velvet beer, and R&H beer. While investigating mysteries, Blackie invaribly encountered harebrained Police Inspector Farraday (Maurice Tarplin) and always solved the mystery to Farraday's amazement.

Initially, friction surfaced in the relationship between Blackie and Farraday, but as the series continued, Farraday recognized Blackie's talents and requested assistance. Blackie dated Mary Wesley (Jan Miner), and for the first half of the series, his best pal Shorty was always on hand. The humorless Farraday was on the receiving end of Blackie's bad puns and word play.

Reviewer: pizzaboss - favoritefavoritefavoritefavorite - November 4, 2021
Subject: Excellent example of Great old radio detective drama
First, reviewer Albie is incorrect when he states both main actors committed suicide.
Morris died of an overdose of barbiturates (unintentional) it was ruled and Kolimar died in his sleep after breaking his shoulder at home.
The show is very entertaining and aside from the organ music is, in my opinion, a 4-5 star show..
Reviewer: chuck870 - favoritefavoritefavoritefavorite - September 14, 2021
Subject: Boston Blackie
I had to bail on this after a dozen episodes because of the organ music. I enjoyed the episodes otherwise 😷
Reviewer: Den NC USA - favoritefavoritefavoritefavoritefavorite - February 15, 2021
Subject: Agreed, the organist is not so Shmoooth!
I've enjoyed the comments, all positive but for (listed on some sites) organist Lew White. (We know he wrote the theme...) After a couple of Champagne Velvets... For all of youse who boo hoo Lew, tooo bad for yoouuu.
Barry Craig's hipster in the night sax opening is much more my style too. But hey, Blackie and Mary and Farraday take the action with style enough to let the rest of it not get on my nerves.
The organ's out of the past, but Boston Blackie's on the case, and the show's got wit and pace.
Now, let's get back to Blackie at the scene of the crime, inside the garage where Blackie's picked the lock (Farraday's wanting to learn him how it's done) and they've left the door open, and ....
So, folks, do I ding Lew and leave one star off?
I'll give it over for repartee twixt Mary and Blackie.

Other voices I recognize were Jackson Beck, who played a movie director in one episode I recall. He was Superman's announcer among many voice roles. He was Bluto in the Popeye cartoons. And I recognized Ralph Bell, who was in many radio shows and in a TV soap opera. I heard Frank Lovejoy in a BB episode today.

Otherwise, this is a fine set that sounds great!

Uploaded by Lum Edwards on September 3, 2007